12 Movies to Watch if You Like Steven Spielberg’s ‘Duel’ 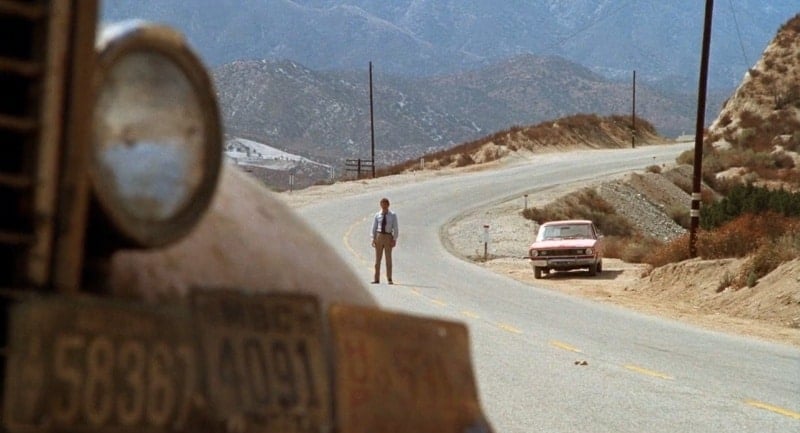 Shift into a higher gear and beat the algorithm with our recommendations on films like Steven Spielberg’s Duel.

By Meg Shields and Anna Swanson · Published on November 13th, 2021

Welcome to Beat the Algorithm — a recurring column dedicated to providing you with relevant and diverse streaming recommendations based on your favorite movies. Today, we’re recommending movies to watch if you like Steven Spielberg’s Duel.

Few feature directorial debuts are as auspicious as Duel, the 1971 ABC Movie of the Week that announced the arrival of one of cinema’s most influential figures: Steven Spielberg.

Don’t let the whole “TV movie” thing throw you off, or fool you into dismissing Duel as some after-school, Hallmark-level fluff. A quick education working on small-screen dramas like Columbo and Rod Serling’s Night Gallery endowed Spielberg with a keen understanding of pacing and suspense, key ingredients that would elevate the simple concept of a road rage thriller into a bonafide big rig classic.

With a script from I Am Legend novelist Richard Matheson, adapting his own Playboy-published short story of the same name, the taut, minimalist thriller follows David Mann (Dennis Weaver) as a true everyman(n). He’s an average Joe on a business trip through the California desert who runs into trouble after a confounding encounter with a tanker truck. The road rage game of cat and mouse escalates into deadly territory, and Mann has to step up his defenses if he wants to drive away with his life.

Making use of the scarce landscape and the limited cast, Duel is proof that great things can come in incredibly restrained packages. The movie is still heralded as an outstanding effort from the young filmmaker, and it’s guaranteed to set nerves on edge with the best psychological action thrillers.

It’s hard to live up to the legend of Spielberg, but the following 12 movies deliver high stakes excitement, tense standoffs, and a highway’s worth of exhilarating action. Quite possibly one of the tensest films ever made about long haul transport, The Wages of Fear is the undisputed gold standard of vehicular thrillers. Like Duel, The Wages of Fear takes place in a desert that may as well be purgatory itself; a hostile, alien landscape caked in dust, rock, and carrion.

In Henri-Georges Clouzot’s film, four European criminals find a precarious ticket out of their liminal existence in Las Piedras. An American oil well has caught fire, and the only way to stifle the flames and cap the will is with an explosion. With short notice and rickety equipment, the job is too dangerous for the rig’s unionized employees … but fully within the realm of reason for restless criminals desperate for cash. Their task is to transport volatile nitroglycerin through the mountains, jungle, and washboard roads. Their survival is uncertain and their lives are disposable. One of the great cinematic nail-biters, The Wages of Fear is pure, unfiltered suspense. You’ll be dabbing the sweat from your brow, mark our words. A seminal film noir, a taut road-trip thriller, and a brilliantly chilling output from director Ida Lupino, The Hitch-Hiker delivers on every front. The film follows two friends who are heading south of the border for what is supposed to be a relaxing fishing excursion. That is until they pick up a psychopathic hitchhiker who ropes them into his plan to escape into Mexico. Based on the story of a real-life spree-killer, the horror flick captures the terrifying possibilities of the open road with keen attention to detail. The kicker here is the hitchhiker’s peculiar affliction — an eye that never closes. It’s a brilliant touch that turns the gimmick into a grand source of tension and is just one of many examples of the film excelling in the fear department. In the mood to watch an everyman be psychologically tortured by a psychopath? Well, if you’re ok with doing without the vast stretch of desert that Duel offers, Cape Fear will certainly scratch that itch. The classic noir thriller follows lawyer Sam Boden (Gregory Peck) as his family is stalked by the deranged and cruel former inmate Max Cady (Robert Mitchum). The climax ends up being more aquatic than Duel, but setting aside, Cape Fear delivers a nail-bitingly intense thriller about a man pushed to his limit when up against a maniac demanding revenge. Triple feature a Duel sandwich with Scorsese’s stupendous 1991 remake for a truly wild night.

Available to stream on the Criterion Channel.

Duel is one of the great “does what it says on the tin” movies. There is a Duel. And it is with a big scary truck. But lurking under the film’s undercarriage is another thornier layer of fear: that of a city dweller running afoul of the rural working-class, with violent results. From our brief glimpse into David’s life at home and his shiny red Plymouth Valiant, we can assume he’s a city boy. And that urban entitlement, that rat race business, drives him (pun intended) to flex on the wrong big rig. A similar fate befalls the Atlanta businessmen of John Boorman’s Deliverance: they butt heads with the locals, breaking unwritten social codes, and courting violence they don’t deserve. What follows is a bloody, bone-cracking, and nail-biting attempt to survive, despite all odds. Now I know what you’re all thinking: what if road rage was a state-sanctioned sport? Enter: Death Race 2000, the greatest entry in the “our dystopia has organized sports” films of the 1970s. Look, if Rollerball had David Carradine in a gimp suit maybe it’d have stood a chance. The film takes place after the world falls to bits in 1979. In the year 2000, five drivers prepare for the 20th annual Transcontinental Road Race, a cross-country competition to pacify the unruly population. Drivers cross the continent in suped-up cars as fast as possible, mowing down innocents for bonus points. Each driver has a pro-wrestling-like persona. And our hero is Frankenstein (Carradine), a national hero who intends to assassinate Mr. President, the ruler of the current American regime. It’s vehicular exploitation fare at its finest. And paired with Duel, it’d make for one heck of a turbo-charged, horn-honking double bill. If you’re looking for cars that kill, you’ve come to the right place. Meet Christine: she’s a 1958 Plymouth Fury and boy, does she live up to her name. When high schooler Arnie (Keith Gordon) comes into possession of the classic car and steps up his confidence game, he believes that things are changing for the better. But behind her chrome and glass, there’s something deadly lurking under the hood of Arnie’s new most prized possession. With plenty of deadly automotive carnage to be found, this John Carpenter flick is essential for Duel fans.

Meg Shields is the humble farm boy of your dreams and a senior contributor at Film School Rejects. She currently runs three columns at FSR: The Queue, How’d They Do That?, and Horrorscope. She is also a curator for One Perfect Shot and a freelance writer for hire. Meg can be found screaming about John Boorman’s ‘Excalibur’ on Twitter here: @TheWorstNun. (She/Her).