Amazon Sidewalk: How to opt out on your Echo or Tile devices in your phone settings 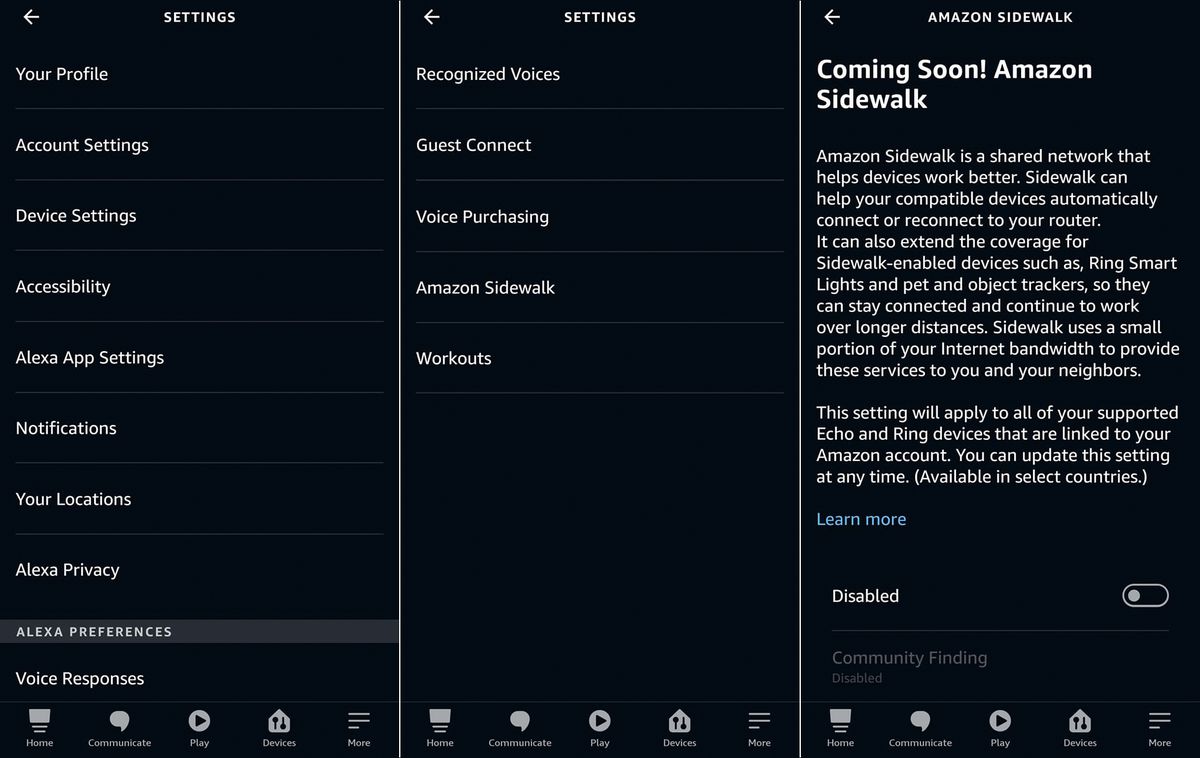 Whether you want it or not, Amazon’s new Sidewalk service is here. As of today, Amazon’s Internet Sharing Network has been enabled on millions of Amazon Echo and Tile devices. But if you don’t want to, there is a way to opt out. Here’s what you need to know before making your decision.

First and foremost: Sidewalk is Amazon‘s effort to create a “mesh” network of interconnected devices, its own as well as those made by participating third parties. Sidewalk-compatible devices – of which there will likely be many more – connect to each other via Bluetooth and radio frequencies. Your devices are connected to all other Sidewalk compatible devices within range (and to the Internet connections of those devices), which are connected to all other Sidewalk compatible devices within their range and so on. This allows all of these devices to stay connected to the internet even if the devices themselves are out of range or disconnected from their home wifi networks. It also means that your neighbors’ data goes through your device and your data goes through theirs. You will share a small amount of your Internet bandwidth with your neighbors, and they will share theirs with you, unless you make the effort to turn it off.

Sidewalk has been available for Ring Spotlight and Floodlight cameras since late last year, but now Amazon has significantly expanded the service (and, therefore, the network it creates) to include many other devices: most Echos, Echo Dots, Echo Pluses, Echo Shows, Echo Spots, Echo Studios, Echo Inputs, and Echo Flexes enabled Sidewalk on June 8 (some older models are not compatible with Sidewalk). The new Tile trackers, as well as the devices that Tile is integrated with, will power up on June 14. Level smart locks have been able to connect to certain Ring video doorbells through Sidewalk since the end of May.

And there will likely be more to come: Amazon is actively seeking developers to add Sidewalk functionality to its devices. The more devices that Sidewalk is enabled on, the bigger and better the network will be, which is why Amazon has taken steps to ensure that as many devices as possible are on the network. It also means that we don’t know just what Amazon can and will ultimately use Sidewalk for.

“If this service doesn’t give you the extra functionality you need, it sure looks like it should be turned off,” David Choffnes, associate professor of computer science at Northeastern University, told Recode. “Because there is only the potential for information to be shared beyond what is there today.”

Before we explain why and how to turn off Sidewalk, let’s talk about its potential benefits. If your internet connection goes down and Sidewalk is turned on, your Ring security cameras can still send you security alerts (but no video; these files are too large). Amazon has promoted Sidewalk as being useful for locating a lost pet or even a lost person – Careband, a portable locator for people with dementia, recently announced that it is working with Amazon to see how it can use Sidewalk. If you have Tile, Sidewalk will almost surely increase its efficiency, as the network of devices that can help locate your Tile will be greatly expanded.

(It should be noted that Amazon isn’t the only company doing something like this. Apple’s “Find My” network uses all Apple devices that Find My can track not just iPhones and MacBooks lost, but also now AirTags and even third-party devices using Bluetooth. AirTags, in particular, have raised concerns that they could be used to track people down if they are sneaked in, for example, in the car or someone’s purse. And while you may opt out of Apple’s global My Network search, that means losing the ability to track your own devices through it. And that means if you lose your iPhone or MacBook, Find My won’t help you get it back. This is a major hurdle.)

Amazon says Sidewalk uses a minimal amount of your devices’ power and Internet bandwidth to do its job – 500MB per month, maximum. If you are on a measured data plane, however, this might be more data than you are willing (or can afford) to provide. In terms of privacy and security, Amazon also claims to have taken all available measures to encrypt and secure your data. Your neighbor does not have access, for example, to a live Ring video from your room. In fact, your neighbor won’t know at all that your data is going through their devices. Oh and, despite the data consumption, Sidewalk is free.

The red flags of the sidewalks

Even so, you might not feel very comfortable with the idea that your data is going through your neighbor’s network or devices, or maybe you don’t want to share even a minimal amount of tape. passing with them. Maybe you don’t have much faith in Amazon’s privacy protections. You might be okay with having an Amazon smart speaker listen to you in your home, but being part of Amazon’s mesh network is too far a bridge.

Or maybe, like some privacy experts and academics, you find the opt-out “option” disturbing, or wonder what use Amazon could have for this free service beyond what is advertised.

“Despite all the controls they have in place – and there are good controls there. … It should not be enabled by default, ”said Choffnes. “I think most people won’t understand what this thing is and can just go ahead with the default because they don’t know otherwise.”

An Amazon spokesperson told Recode that the decision to turn off the service was “to make it easier for [customers] to enjoy benefits, such as more reliable connections, extended working range for their devices, easier troubleshooting, and no additional connectivity costs for customers.

But it’s in Amazon’s best interest to have as many people logged in as possible, and it knows people are much less likely to opt out of something that’s turned on by default.

“If you can’t provide a compelling reason for everyone to come on board, then your solution to that is to get them to step back – that’s a red flag,” Choffnes said.

Pardis Emami-Naeini, who studies Internet of Things security and privacy, told Recode that she was also concerned that Sidewalk and its default model would make people more comfortable with sharing their data than ‘they are not already. And, she noted, we still don’t know how Amazon will use Sidewalk, and whatever data it will pull from it, in the near future or the near future.

Here’s how to unsubscribe, since you’ve been automatically activated

So, if you want to opt out of Sidewalk, it’s pretty straightforward. For Echo devices, you’ll open the Alexa app, then Settings> Account Settings> Amazon Sidewalk> Off

If you have both devices and apps, you should probably unsubscribe from both to make sure. And you can always return to Sidewalk if you want. But you’ll make that choice, rather than Amazon making it for you when you weren’t paying attention.