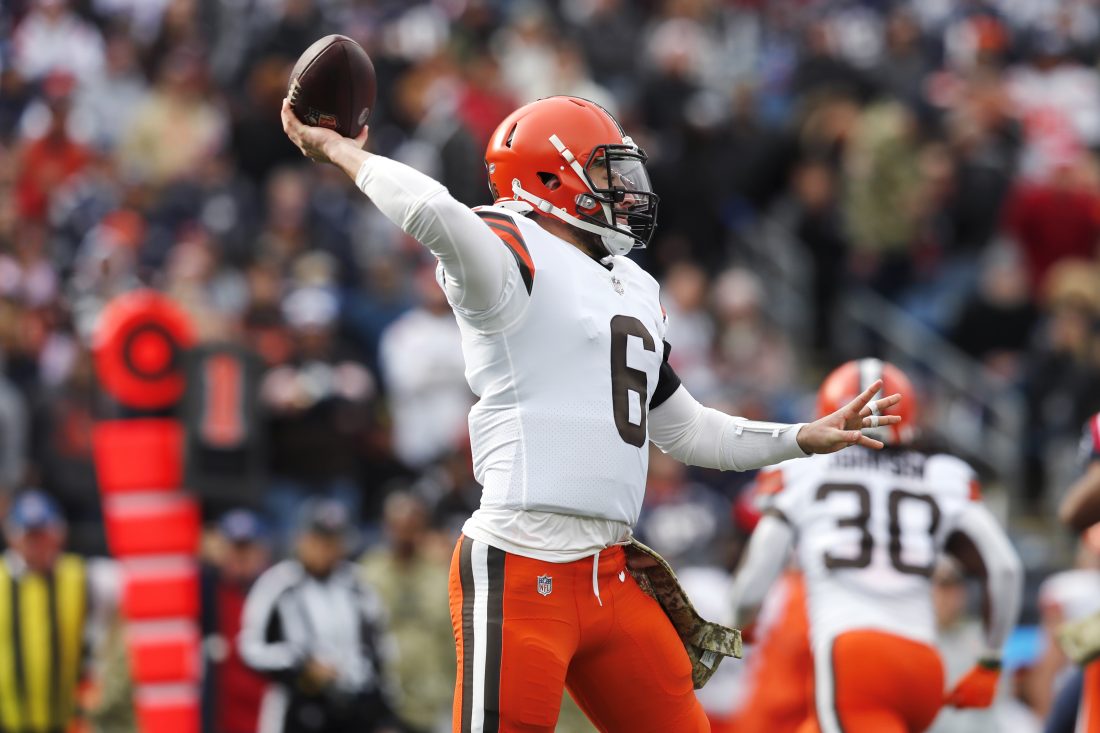 Cleveland Browns quarterback Baker Mayfield (6) throws a pass during the first half of an NFL football game against the New England Patriots, Sunday, Nov. 14, 2021, in Foxborough, Mass. (AP Photo/Michael Dwyer)

BEREA (AP) — One day off was enough for Baker Mayfield.

The Browns’ battered quarterback returned to practice after taking a day to rest an assortment of injuries and appears set to play Sunday against the Detroit Lions.

“That’s what we are planning for,” said offensive coordinator Alex Van Pelt.

Mayfield was kept off the field on Wednesday, when he said he’s never been as “beat up” in his career and seemed unsure of his status to face the Lions (0-8-1).

But the 25-year-old returned for Thursday’s workout and looked sharp while firing passes and throwing on the move despite knee and foot injuries during the portion open to reporters.

Mayfield added another line to his medical chart last week when he hurt his right knee in the third quarter of a 45-7 loss to the New England Patriots. Backup Case Keenum, who started one game earlier this season when Mayfield couldn’t play because of a torn labrum and fracture in his left, non-throwing shoulder, finished up.

“But he’s a guy that wants to be there for his teammates and play every week,” Van Pelt said. “It’s crappy that he’s as sore as he is in multiple areas, but it shows how much he loves his teammates and wants to play and be out there on Sundays.

“It’s definitely going to affect him, a lot of guys are affected with a lot of things at this point in the season. That’s just part of the deal of living in the NFL world.”

While Mayfield returned, the Browns (5-5) are hoping to get back star running back Nick Chubb on Friday. Chubb missed last week’s game after he and rookie running back/returner Demetric Felton tested positive for COVID-19.

Chubb and Felton are eligible to be activated after 10 days, providing they’re asymptomatic.

Backup running back John Kelly Jr., who tested positive a day before Chubb and Felton, was activated from the reserve/COVID-19 list on Thursday and practiced.

Van Pelt was optimistic that Chubb, who is third in the league with 721 yards rushing, will be available for Sunday’s game.

“Guys come off the COVID list and play all the time across the league,” he said. “So if he’s available, I’m sure we’ll be very smart with how we handle his carries, but he’s obviously a big part of what we do offensively.”

Browns star defensive end Myles Garrett was also back after missing one day because of a personal matter. Garrett leads the NFL with 13 sacks. Wide receiver Jarvis Landry (knee) and Malik Jackson (knee) returned as well.

Wide receiver Donovan Peoples-Jones (groin) rode a stationary bike at the start of Thursday’s practice. He appeared to aggravate an injury that kept him out of two games while running a route on Wednesday.

NOTES: Browns defensive coordinator Joe Woods said there’s no strain in his relationship with Garrett, who seemed to criticize his coach when he said no adjustments were made in last week’s blowout loss. “That stuff doesn’t really bother me,” said Woods, who has been a target of fan criticism. “I have a great relationship with Myles. He has the respect of all the players on defense. There’s nothing going on within the building or anything of that nature. I talked to him today so everything’s good, again it’s just frustrating losing the way we did.”

Today’s breaking news and more in your inbox