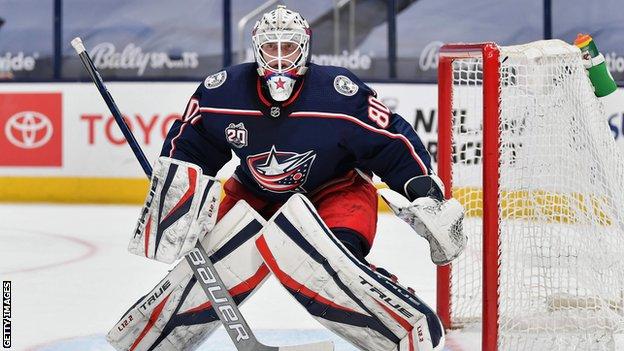 Columbus Blue Jackets goaltender Matiss Kivlenieks has died following a “fireworks malfunction” on a night out on July 4th.

U.S. media reported that an initial autopsy performed on the 24-year-old revealed that he died of chest trauma caused by fireworks.

He was then in a hot tub at a party in Novi, Michigan.

Initially, Michigan police said Kivenieks, a Latvian international, died of a head injury sustained while emerging from a hot tub.

“It seems that there were fireworks that went off accidentally in the direction of Mr. Kivlenieks and other people sitting in the hot tub,” Lt. Jason Meier said.

The Latvian signed with the Blue Jackets in May 2017 and spent most of his time with the Cleveland Monsters of the American Hockey League.

He appeared in two games with the Blue Jackets in 2020-21 and made six appearances – including four starts – the previous season.

He also represented his country at this year’s World Championships.

“We are shocked and saddened by the loss of Matiss Kivlenieks, and we offer our deepest condolences to his mother, Astrida, family and friends during this devastating time,” said Blue Jackets president of hockey operations John Davidson. .

“Kivi was an exceptional young man who greeted everyone every day with a smile and the impact he had during his four years with our organization will not be forgotten.