Craftopie (Game preview) is a new multiplayer survival action game made in Japan. We wanted to create a game that takes the features we love from other games and genres and brings them together in one experience. Some of these features include hunting, farming, hack-and-slash, building, automation, and more! In Craftopie, you can explore a huge world and do anything you can imagine!

When we imagined this Craftopie it would be like – by combining our favorite features with our favorite games – we knew bringing them all together would be something special. Features like cutting trees, mining rocks and other essential resources from sandbox games. Also, being able to explore the world and discover secrets, like in open world games, while fighting hunger and the elements; all the classic survival game features we wanted to include.

Grow and harvest your own crops, a farming simulation staple, or dive into dungeons to collect loot like in our favorite hack-and-slash games! Hunt monsters and creatures, inspired by the popular monster hunting genre here in Japan and if the swords don’t work, cast magical spells, like in fantasy RPGs! But don’t worry if it all sounds like a lot, with machines and a little ingenuity you can automate tasks and run your own factory to keep things running efficiently! We want to make a utopia for everyone. This utopia is Craftopie!

Craftopie combines many elements in order to stimulate your creativity. What would happen if you combined this with that…? We look forward to your new crazy combinations!

Evolution throughout the game preview

Craftopie is released today as an Xbox Game Preview title. There are still a lot of things we would like to do and develop to Craftopie (Game preview) and based on the feedback we receive from players, we will continue to make improvements to make the game better. You can also share your opinions or suggestions directly with the developers on the official Discord. Let’s work together to create the best game. 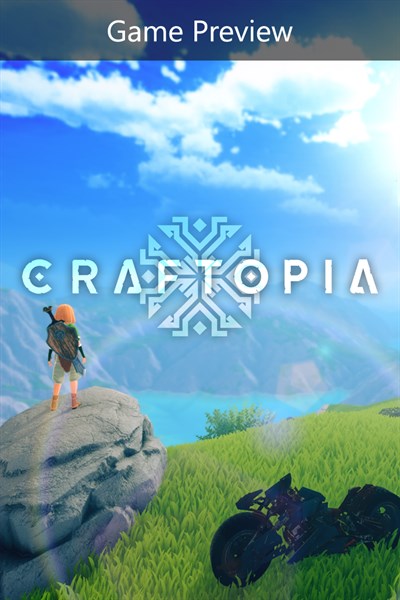 This game is still under development, and its content and functionality are subject to change in the development process until the final release. Please recognize that this is not yet a finished product before purchasing. Craftopia is the brand new open world multiplayer survival action game. We imagined what would happen when we combined our favorite video games. Cut trees and mines like in Sandbox, Explore the world like in Open-world, Fight hunger like in Survival, Cultivate and harvest like in Farming, Collect loot in dungeons like in Hack-and-slash, Automate activities as in Factory management, Hunt monsters and creatures as in the action Hunting, Cast magic spells as in Fantasy RPG. Now we have a utopia for all of us. It’s Craftopia. Over 20 cultures are available for you to grow. Of course, you can grow crops one at a time, but you can do more. With the power of agricultural machinery, you can have large-scale fields. While enjoying your self-sufficient life, why not make your orchards colorful? Industrialization and Automation You can automate each collection of items. When are you tired of chopping wood and mining stones? Let’s automate! … Tired of automating simple activities? So let’s start using conveyor belts to build huge factories. Breeding By throwing Monster Prism at creatures, you can catch them as pets. Not only animals like cows and deer, but most monsters are also tame. Monsters, you have to catch them all! Explore the Dungeons When the detector sounds, it is a sign that you are approaching a dangerous dungeon. Head back to town to equip yourself, then enter the dungeon in the hopes of finding treasures. It changes shape every time you enter. At the end of the dungeon, you will encounter bosses to fight. You will gain new abilities when you unleash the power of the world. Fishing At Craftopia, you can also go fishing. Taste fresh fish and craft a turtle shell shield! Once you’ve gotten used to shore fishing, it’s time to build a boat to sail! Let’s catch a whale! Vehicles Hoverboards, motorcycles, helicopters, automobiles, biplanes, tanks, hot air balloons and machines… Gather materials to make what you want to pilot! You can share a ride with your friends to explore the world together! Skill Tree Over 100 skills to learn in Craftopia. You can create your character by learning various skills. Some are good at crafts; some are good at broad swords; some could do better in automation. Your work will vary throughout the adventure, depending on your playstyles! Character Creation Gender / Gender, Race, Hairstyle, Eyes, Faces, Skin Tones, Facial Hair, Makeup, you can customize them all! Multiplayer Multiplayer is available. You can build factories, explore dungeons, catch fish with your friends. The choice is yours! You can be an assassin if you want to.