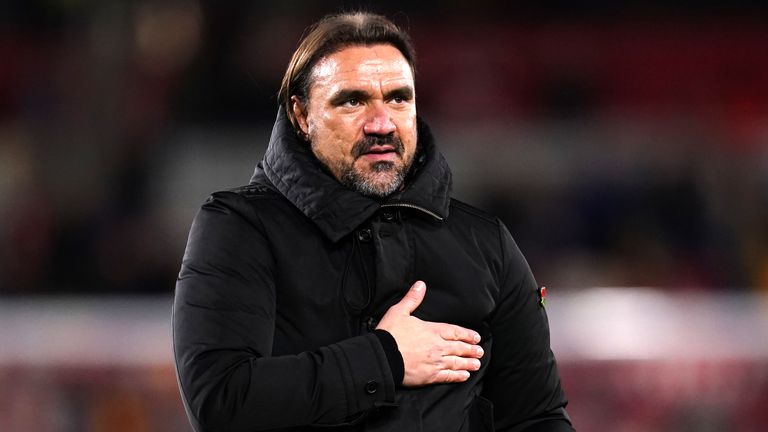 Terms were agreed verbally earlier on Saturday and all the legal necessities have been passed.

Norwich are likely to confirm the deal in the next 24 hours, and the club’s bosses will stress that Smith was their first choice from the start of the process to identify Daniel Farke’s replacement.

Farke was dismissed after Norwich beat Brentford 2-1 in their final game before the international break – their first Premier League win of the season.

Despite that success, they are bottom of the table with five points from their first 11 games.

Smith was dismissed just a day after Farke – a Friday night defeat to Southampton was Villa’s fifth loss in a row and left them just two points above the drop zone.

Smith’s overall record at Villa was excellent, having led them to promotion from the Championship via the play-offs in his first season at the helm, before Premier League finishes of 17th and 11th – plus a League Cup final appearance.

Smith and former Chelsea boss Frank Lampard were understood to be the main contenders to take charge at Norwich, but the latter withdrew from the running as he does not feel the job is right for him at this stage of his career.

Sky Sports News has been told that, even before Lampard withdrew, Norwich’s bosses had been impressed by Smith’s ideas for the squad.

He will begin the task of trying to guide Norwich to safety when they host Southampton – his final opponents as Villa boss – on November 20.

The outlook certainly appears gloomy with five points from two draws and one win in 11 games, but the Canaries still remain only five points deep in the relegation zone – a relatively small margin to overturn with 27 games left to play.

The primary concern is how their rock-bottom status in the division transfers across a raft of metrics on the pitch: goals, expected goals, chances created, passes in the final third and goals conceded – to list just a few.

The underwhelming returns up top are a stark contrast to the team’s free-scoring exploits during their title-winning promotion campaign in the Championship last term.

Of course, the step up into England’s top tier plays a factor, as it did during their immediate relegation in 2019/20, but the disparity between seasons appears even greater this time around – and it ended with a rock-bottom finish last time.

The Canaries’ tally of just five league goals is even more alarming when you factor that two of those came from the penalty spot. If you exclude spot-kicks, the club has three top scorers – each with a solitary goal and nearly a third of the season played.

In addition to deficiencies at both ends of the pitch, the departure of creative midfielder Emi Buendia – who joined Dean Smith at Aston Villa in a £38m deal this summer – also appears to be a key factor behind the decline.

Indeed, the visualisations below reveal a dearth of activity in the exact areas where the Argentine operated with league-topping effectiveness last term.

Smith might look to negotiate funds for a creative midfielder in January or utilise connections for a loan deal, in addition to potentially turning to current out-of-favour Chelsea loanee Billy Gilmour to boost solidity in central areas.

Rekindling Todd Cantwell’s form could also be high on the agenda. The local boy shone for Norwich in the Premier League two years ago and attracted a host of powerhouse suitors before his form dipped.

After SWAC title victory, Jackson State is ready for more

Tkachuk doing it all for Flames while keeping emotions in check