DOC NYC 2021 Women Directors: Meet Cathryne Czubek – “Once Upon a Time in Uganda” 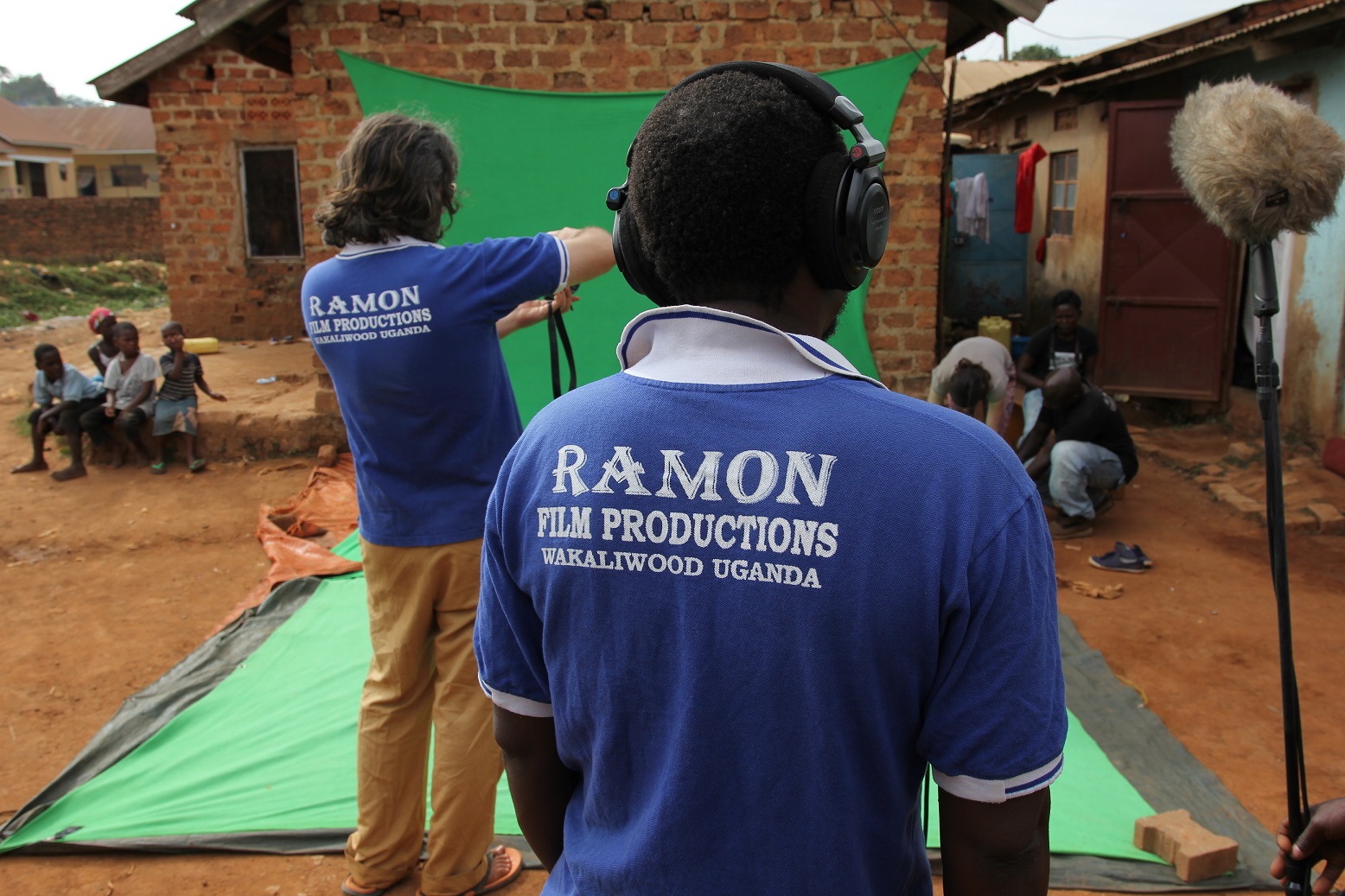 Cathryne Czubek is a director and producer based in New York City. “Screw You Cancer,” her award-winning doc series for Condé Nast Entertainment, was the first digital series to receive a prestigious Television Academy Honor recognizing the power of television to bring awareness to important social issues. In 2010 she started the production company Salted Media. Czubeck directed the feature documentary “A Girl and a Gun” that premiered at the 2012 DOC NYC film festival before a theatrical run.

“Once Upon a Time in Uganda” started screening at the 2021 DOC NYC Film Festival on November 12. The fest runs from November 10-28. Hugo Perez co-directed the film.

W&H: Describe the film for us in your own words.

CC: “Once Upon a Time in Uganda” is a bromantic comedy adventure tale. It tells the story of the friendship between comedy action filmmaker Isaac Nabwana and film nerd Alan Hofmanis, two guys from opposite sides of the world who meet over their shared love of action movies. Together, they bring Isaac’s action movie studio Wakaliwood, homegrown in a village in Uganda, to global fame.

W&H: What drew you to this story?

CC: I think you’d be hard-pressed to find any filmmaker not drawn to this story. When we heard about how Isaac was cranking out feature length comedy action movies with limited resources but a devoted crew and group of actors, it immediately drew me in.

The first trip was just myself, Hugo Perez, [cinematographer] Matt Porwoll, and our Ugandan team from Talking Film Productions. We knew the story was great, but when we got there on the ground the whole world of Wakaliwood was even better than we could have hoped. The sheer ingenuity, joy, and unbridled passion of Isaac and all of Wakaliwood was exhilarating, and I have never had so much fun filming a story in my life.

W&H: What do you want people to think about after they watch the film?

CC: I often think about this documentary as a love poem to Isaac, Alan, and Wakaliwood, but it is also a love poem about filmmaking and collaboration and the power of movies to unite, so I hope that audiences walk away with a huge warmth in their heart and are inspired to collaborate and create. Isaac shows us that nothing should stand in the way of our dreams. Most of all, I hope that this film just brings people joy — there’s so much darkness in the world and I hope that this film can serve as an antidote.

We really treated this film like a fairy tale in many ways. Because we were making a film about filmmakers and filmmaking, we were able to break so many normal documentary rules with this film. For instance, a favorite creative moment was in talking with composer Andrew Hollander extremely late one night on our run up to the finish line and we were still trying to figure out the opening score. It’s a bit of a long story that we love to tell, but essentially we decided the score should immediately start taking you on this journey through not only the world of the film, but the minds of the extremely passionate and creative guys we made a film about. The score takes you in one direction initially, and then is meant to transmit you into Alan’s imagination, reflecting how he always sees the world through movies. It was an exciting aha moment that surprised us both.

W&H: What was the biggest challenge in making the film?

CC: Funding is probably always top of the list for most filmmakers, but next up would be finding the story we wanted to tell. We made eight trips to Uganda and had hundreds of hours of footage with so many different story options to pursue. Co-writer Amanda Hughes and I finally found our film when we leaned into the classic romantic comedy structure to tell the story of Isaac and Alan’s friendship.

Prior to that, we were editing in the wrong direction for quite awhile and realized we’d somehow turned a really fun and exciting story into something rather heavy and flat. That would have been quite a disservice to the lively and wacky spirit of Wakaliwood. Once we embraced the romantic comedy structure the film really started to find its personality.

W&H: How did you get your film funded? Share some insights into how you got the film made.

CC: The story was quite dynamic and unfolded quickly, so in addition to a few grants from New York State Council for the Arts, Chicken & Egg Pictures, and Fork Films, and the generous support of individual funders, I had to get clever with my credit cards to make sure we captured the action in real time. Luckily, I also shoot, so a few of the trips to Uganda were just myself and my right hand man in Uganda, Kyaligamba Ark Martin, which kept some costs down and enabled us to continue to capture the story.

W&H: What inspired you to become a filmmaker?

CC: I actually did not go to film school or plan to become a filmmaker. My dad was an amateur photographer and I grew up taking photos and making prints in his homemade downstairs darkroom. My love for the power of imagery and storytelling started early.

I was headed down a very different path in international relations/INGOs when I realized I wasn’t in love with it. I turned back to photography, and later I was working on a documentary photo series and started experimenting with companion videos. Luckily, a mentor gave me the push I needed to change course yet again and focus on learning video and filmmaking. I borrowed a camera and some audio gear and basically DIY’d my first film. So I really identify with Isaac as a self-taught filmmaker.

CC: Best advice: Have a great pre-production plan and then be ready to let go of it when you start filming. One of the wonderful things about documentary filmmaking is that it’s real life and uncontrollable. Cinematographer Matt Porwoll and I swear by this. We’ve been filming together for years and spend a ton of time in pre-production but always joke that it’s all going to change once we start filming. [Still,] we have a map so we know we’ll have a beginning, middle, and end, even if it’s completely different from what we imagined at the beginning.

Worst: When someone tells you you can’t make the film you want to make because no distributor will want it. It sounds crazy, but it’s happened to me on both of my feature films and it can influence you to edit it in a way that forces a film to be something it is not.

[Another piece of bad advice I’ve gotten is to] get exclusive rights to tell a story. I personally have a big problem with this even though it’s often an expectation from funders/distributors. We considered it after getting some pressure, but ultimately aborted the idea. I feel strongly that a story can be told many many times by a variety of different filmmakers and the result will always be different. Wakaliwood was covered by journalists and filmmakers from all over the world during the course of our filming — which also became an important storybeat in our film — and to have disrupted that part of their story or denied their coverage for the sake of exclusivity to our documentary would not have been in any way even remotely acceptable to me.

W&H: What advice do you have for other women directors?

CC: It’s frustrating, but men are always the go-to in our industry and most women I know feel they have to work twice as hard to get the same opportunities or recognition. My advice is to find other female collaborators to join forces and ally with to make sure you are supported.

I don’t know how I would have made it to the finish line on this film without our main producer, Gigi Dement. We made this film over six years and spent thousands of hours on it, tackling everything from story development and creative to all aspects of production and post. Having a partner who inspires you creatively and you trust logistically on a project, from beginning to end, is essential for me. Producers really are the unsung heroes on films — especially in the documentary world. Anyone can have a good idea or find a great story, but you have to make it happen.

W&H: Name your favorite woman-directed film and why.

CC: I don’t know if I can narrow down to one favorite, but I always refer back to a photographer and filmmaker who really inspired me early on, Susan Meiselas. The way in which she photographed women, particularly in the body of work “Carnival Strippers,” was very different than I feel the male gaze would be on that subject.

I also love Agnès Varda. Her beautiful, quirky storytelling is so distinctive and unforgettable and always makes you look at the world in a different way.

Photographer-turned-filmmaker Lauren Greenfield has always caught my attention for her unflinching look at edgy subjects and the incredible access and trust she gains into the worlds of her subjects.

W&H: How are you adjusting to life during the COVID-19 pandemic? Are you keeping creative, and if so, how?

CC: It’s been tough for everyone. My family had a scary start to 2021, but things seem to be turning around now, thank goodness. At the beginning of the pandemic I definitely experienced an incredible creative inertia, so thankfully I was able to rely on work to distract me. We are currently finishing a commissioned film about Suchi Reddy’s Me + You sculpture in the FUTURES exhibit which is celebrating the re-opening of the Smithsonian’s Arts & Industries Building, our first national museum which has been closed to the public for 20 years. It was the perfect project to work on during the pandemic because we were focusing on beautiful, thought-provoking artwork and a building with an incredible historical significance in our country.

W&H: The film industry has a long history of underrepresenting people of color on screen and behind the scenes and reinforcing — and creating — negative stereotypes. What actions do you think need to be taken to make the doc world more inclusive?

CC: We need an industry overhaul, clearly. Producers and institutions need to provide far more financial resources, mentorship, and work opportunities to support filmmakers of color — especially early in filmmakers’ careers — if we are really going to see a substantive change. Even on small scale independent projects like ours, we need to be more inclusive and mindful.

I can also speak directly about our film on this. I am not Ugandan, so it was incredibly important that we hire local collaborators and have our Ugandan team included from the very beginning. They were involved in everything from logistics and production in Uganda, to creative and story development. Also, when we were near the final cut we went to Uganda to screen for Isaac and our Ugandan producer to make sure we were representing their story accurately. This really influenced some aspects of the final edit and energized one section towards the end of the film.