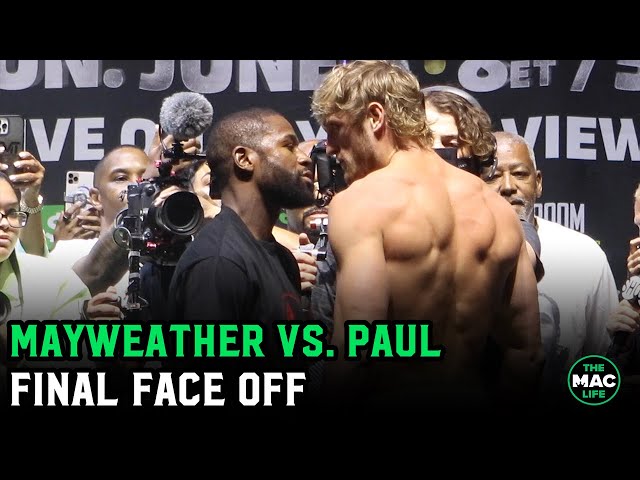 Boxing legend Floyd Mayweather and YouTube star Logan Paul looked at each other one last time in the final showdown ahead of their highly anticipated boxing match.

The pair will meet in the ring on Sunday night in an eight-round exhibit at Hard Rock Stadium in Miami Gardens, Fla.

At 6’2, Logan Paul towered over Floyd Mayweather, who is six inches shorter than his opponent.

But despite the size disparity, the former pound-for-pound king is heavily favored in several sports betting to secure a victory.

The pay-per-view event, dubbed “Bragging Rights,” will not have an official outcome for any of the contestants, as the Florida State Boxing Commission has announced that there will be no judges or official ruling. This means that the only way for either to achieve a decisive victory is to score a knockout.

The last time he saw any action, however, was during an exhibition match against Japanese kickboxing star Tenshin Nasukawa on New Years Eve 2019.

Meanwhile, Logan Paul will be looking for his first win since starting his professional boxing career.

He fought fellow YouTuber KSI once as amateurs and again as pros. The first fight ended in a draw, but Paul lost by split decision in the rematch.

There is an obvious gap between the boxing skills and the experience of Logan Paul and his legendary opponent.

Still, the 26-year-old believes he can achieve the unthinkable. In an episode of SHOWTIME Sports’ Inside Mayweather vs. Paul, the internet celebrity said he would do what no elite boxer could:

Watch the full episode below:

Winner or loser, Logan Paul will receive the biggest salary of his career as he is expected to earn $ 250,000 in base salary, with an additional 10 percent share of pay-per-view.

Meanwhile, Floyd Mayweather would earn a base purse of $ 10 million, as well as a 50% pay-per-view share.

Please take 30 seconds to complete this survey so that we can better understand how to meet your MMA needs.