The 49ers went into the 2021 season needing some help from the back end of their draft class after putting their first-round pick in a backup quarterback role. It’s only been five games, but early returns on this year’s group of rookies hasn’t been great.

One thing that makes the 49ers’ 2021 draft class interesting is No. 3 overall pick Trey Lance, who’s future success will ultimately decide the long-term view of this group. If Lance thrives, any other misses can be forgiven. If Lance struggles, any hits after him become less important.

Ultimately San Francisco’s ability to build Super Bowl rosters will depend on their ability to find starting-caliber players via the NFL draft.

Here is our five-game progress report on the 49ers’ group of rookies: 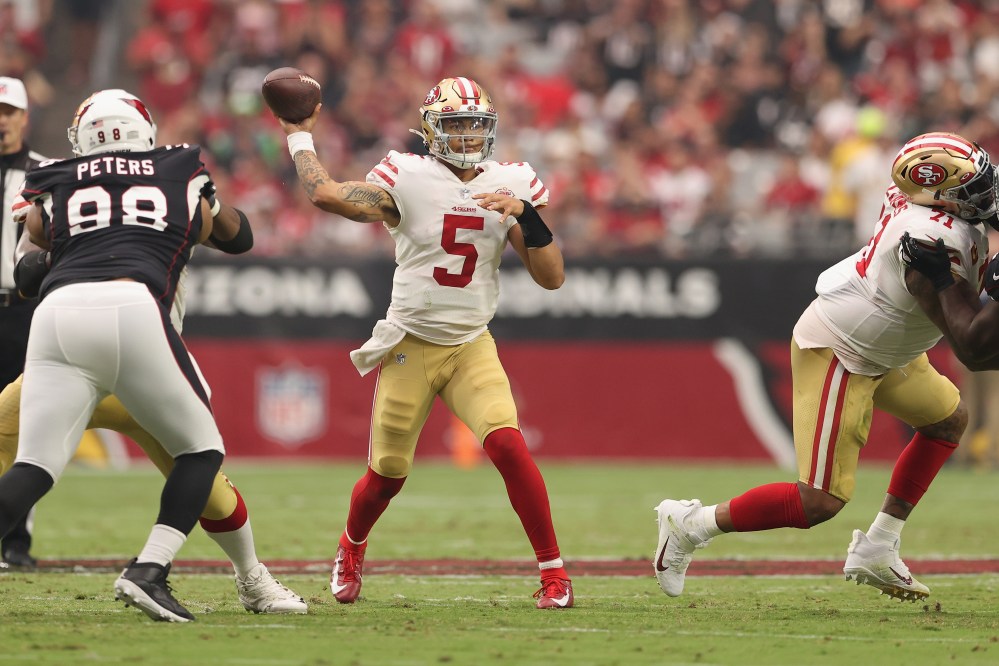 The sample size hasn’t been large, but the flashes we’ve seen from Lance have been very promising. Through six quarters as the quarterback and not a gadget player, he’s flashed escapability in the pocket, good speed and a big arm. There are some issues with reads and recognizing defenses that will get ironed out with more playing time. His accuracy is also a little inconsistent. The 49ers knew they were taking on something of a project with the No. 3 pick though. Overall the early returns on Lance have been promising even if the playing time is minimal. 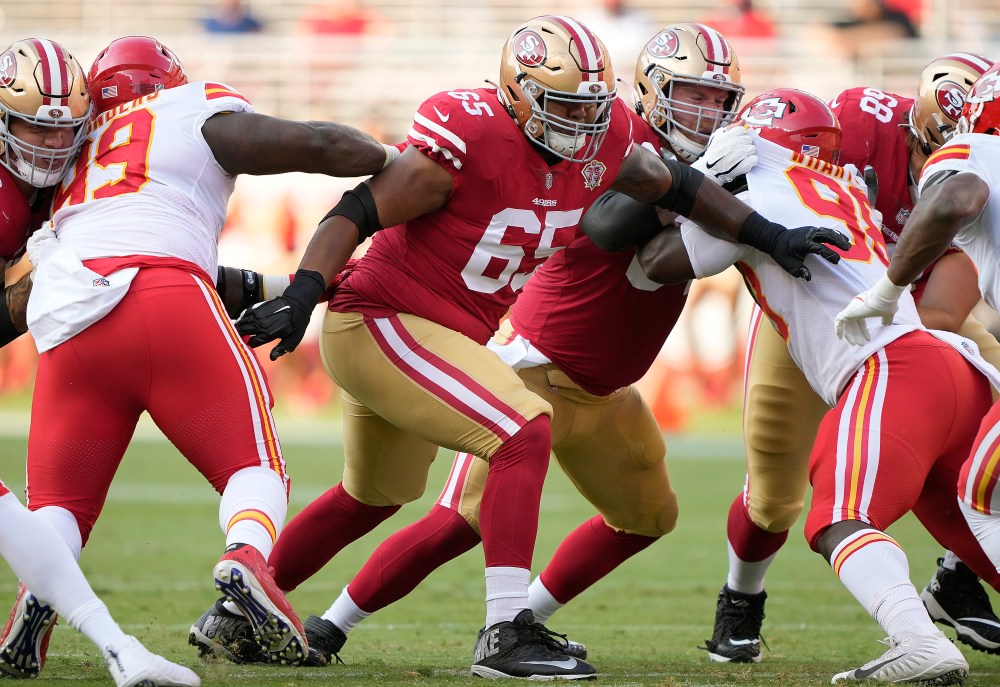 The 49ers traded back in the second round and landed Banks No. 48 overall. So far the move has been an unmitigated disaster. The Notre Dame alum didn’t work his way into the starting right guard competition in camp, and suffered an injury in the first preseason game. As a result, Banks has been a healthy scratch in all five games while right guard continues to be something of a problem area for San Francisco. 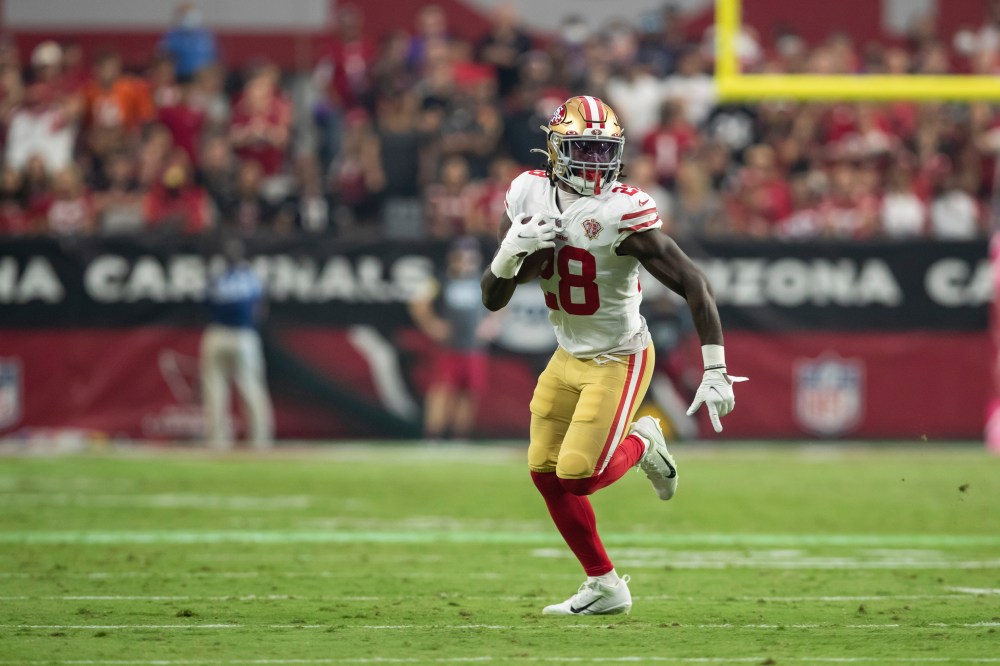 The 49ers traded two fourth-round picks to climb up to No. 88 overall for Sermon. He got off to a tough start as a healthy scratch in Week 1. In Week 2 he suffered a concussion on his only carry, and in Week 3 he scored a touchdown but averaged just 3.1 yards per rush. He was better in Week 4 with 89 yards on 19 attempts, but was relegated to the bench again in Week 5 when he got only one carry. There’ve been some flashes from Sermon, but the inconsistency is pretty hard to ignore from a running back taken in the top 90. 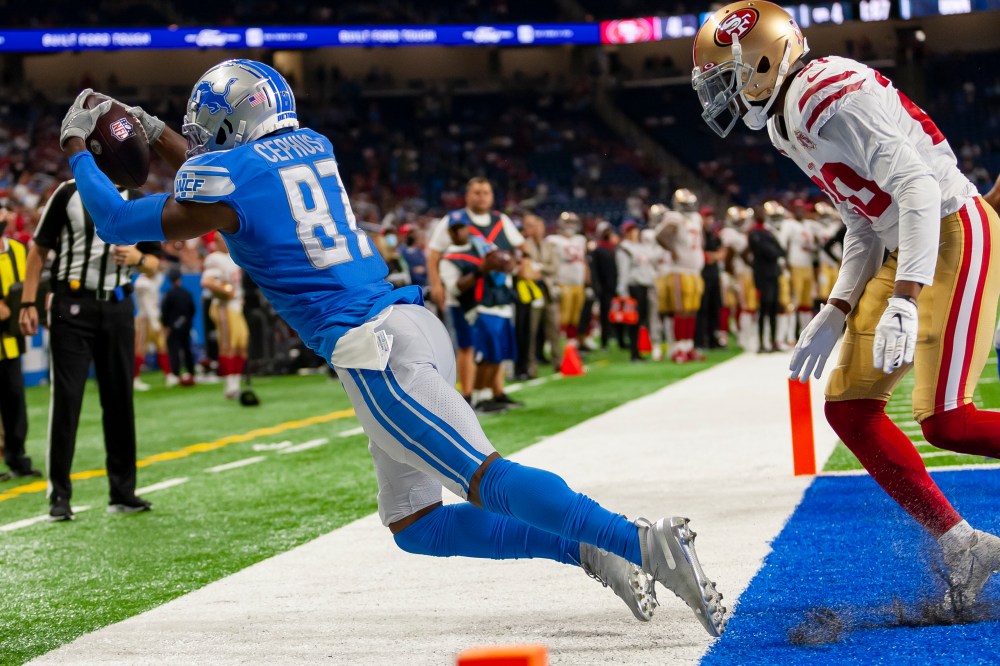 Thomas opted out of the 2020 college season which may be part of the reason he’s had a hard time getting his NFL career off the ground. Despite getting tons of first-team reps in training camp, Thomas has yet to carve out a role in a secondary that’s been bombarded with injuries. Through the 49ers’ first five games he’s seen action in only two of them with most of his work coming on special teams. Thomas played in nine snaps during the season opener in Detroit and allowed three catches for 44 yards on three targets. There’s still plenty of time for the third-round pick from Michigan to get his NFL legs under him, but the start of his career has not been a good one. 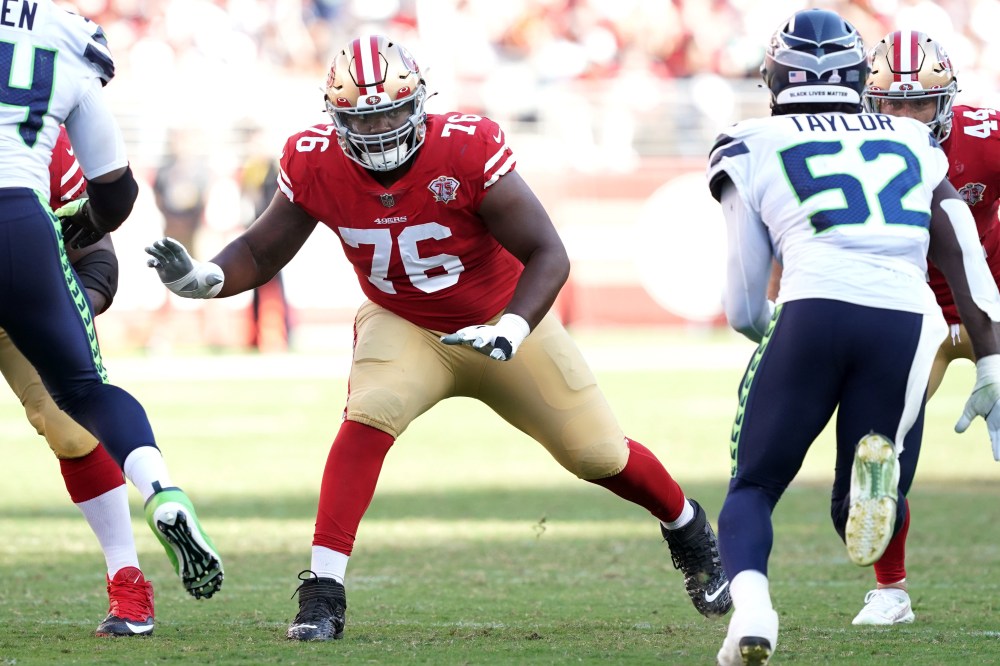 San Francisco selected Moore No. 155 overall with the intention of kicking him inside to compete at right guard after he played left tackle for four years at Western Michigan. An injury to left tackle Trent Williams allowed Moore to stay at his natural position and he acquitted himself well in the preseason, eventually earning the swing tackle job. His brief 22-snap stint in Week 4 when Williams exited with a shoulder injury resulted in one pressure allowed in 18 pass blocking snaps per Pro Football Focus. While he hasn’t contributed a ton on the field, getting a quality swing tackle with a fifth-round pick is not bad.

Lenoir was selected with the No. 172 pick and tabbed as a nickel corner. The Oregon product was pushed to an outside cornerback role in camp because of injury and wound up earning a starting job with Emmanuel Moseley out for the first two weeks. He also saw a ton of playing time in Week 3 after Josh Norman went down with an injury. Since then he’s been relegated to a special teams role. Lenoir flashed several times during his stint as a starting outside cornerback and looked ready to grab hold of a full-time starting job sooner rather than later. Teams targeted him 18 times, and he allowed nine catches for 161 yards and a touchdown. He was also flagged twice. The playing time may be down for Lenoir, but his future arrow is pointing way up. 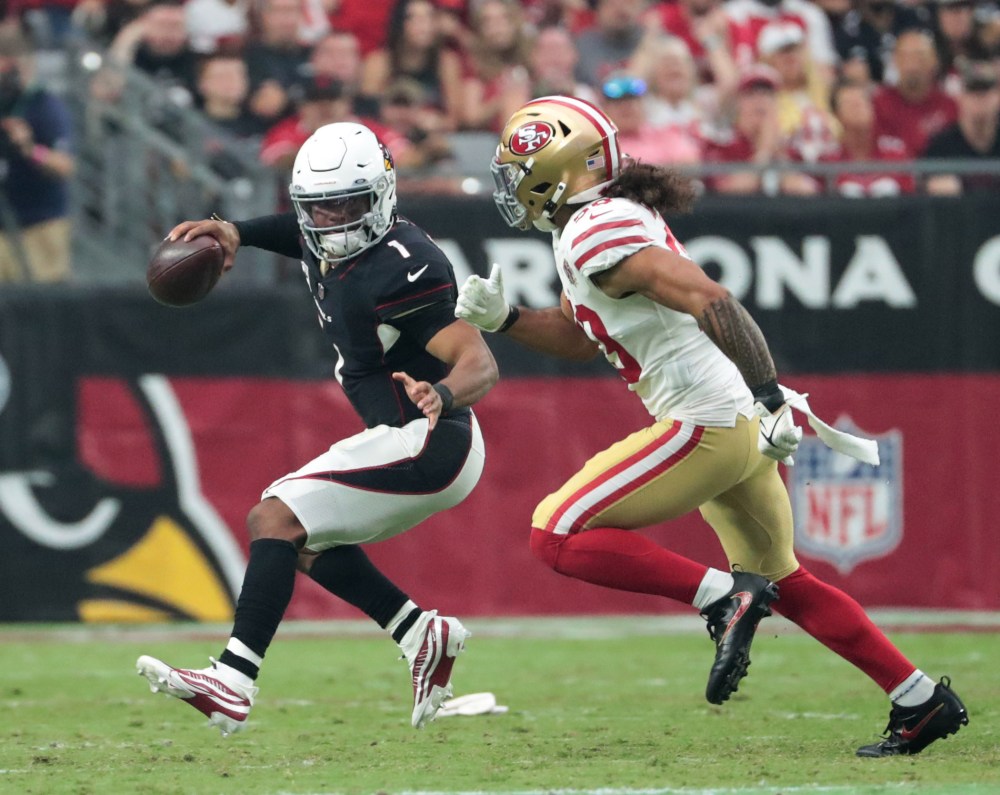 There wasn’t a defensive player who made more noise in camp than Hufanga once the pads came on. The No. 180 overall selection out of USC said on Draft Day his goal was to make the Pro Bowl on special teams as a rookie. He nearly wound up getting the starting strong safety job and looks to be in line for that spot next season. Hufanga in the regular season has played 100 special teams snaps and had some defensive work sprinkled in, but he’s been largely non-impactful. One play that does jump out though is a safety blitz on third down against the Cardinals where he ran free around the corner and nearly tracked down Arizona QB Kyler Murray to force a third-down throwaway late in the contest. Like Lenoir, Hufanga’s future arrow is pointing way up even if he hasn’t produced a ton in five games. 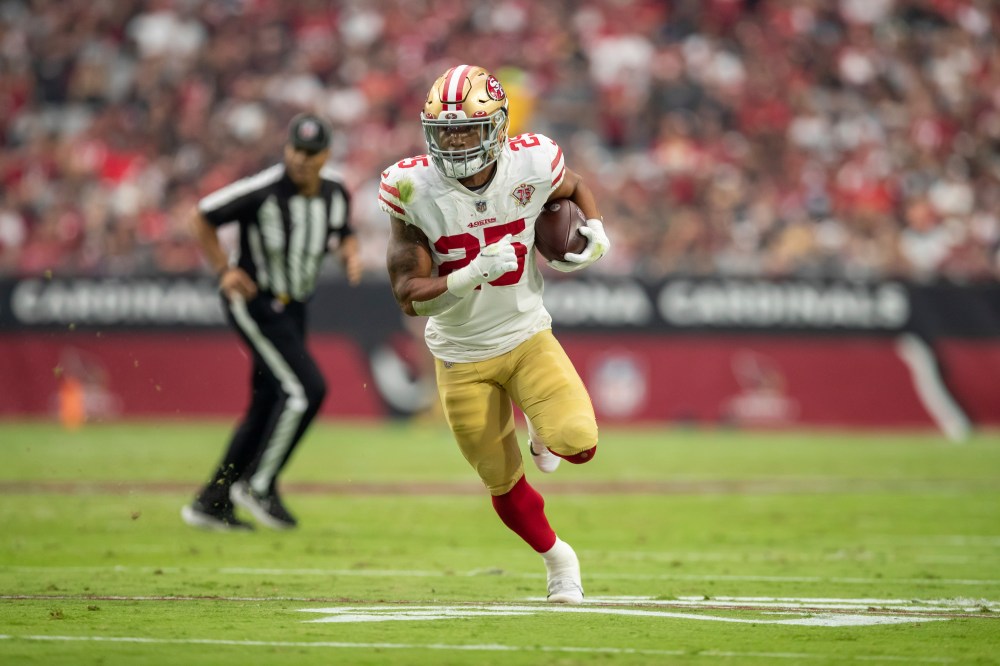 It seemed inconceivable the 49ers would draft two running backs after taking none in the previous three drafts, but it’s a good thing they did. Mitchell, the No. 194 pick from Louisiana Lafayette, has been the team’s best running back when he’s health. He churned out 104 yards on 19 carries in the season opener after Raheem Mostert got hurt. Then he was injured in Week 2, and returned in Week 5 to posted 43 yards on nine attempts. Mitchell has a good combination of speed, vision and tackle breaking ability that allows him to work a lot like Mostert in Kyle Shanahan’s outside zone scheme. Mitchell in three games has 189 yards and a touchdown on 45 carries, and figures to be the starting running back for the foreseeable future.