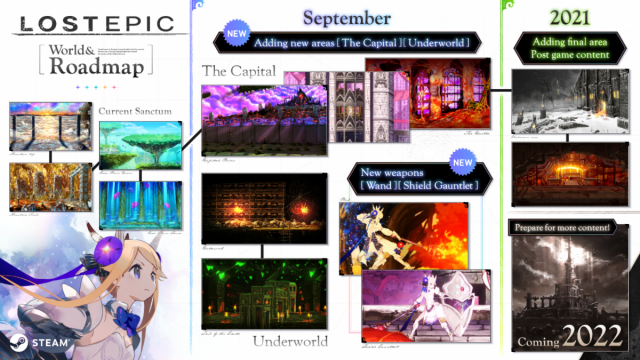 In the latest update, Team Earth Wars revealed upcoming Lost Epic content which is currently in Early Access on Steam. The Roadmap shares details on new levels, weapons, skills, quests, UI improvements, and more in Q4 2021 for Patch 1.0 for Steam.

Currently, players can access a range of weapons and unlock new worlds, the capital and the underworld. The developer aims to add more content in the run-up to version 1.0, including new weapons, including the Shield Gauntlet which allows players to protect themselves without losing stamina. There’s also the Wand which will inflict Status ailments with high offensive stats and the Torch which can light up dark areas. There will also be additional quests from new NPCs in The Underworld.

There will also be future updates planned for later this year which include the story finale, the last world to be added, more weapons, skills, additional types of combat elements as well as content. post-match. There will also be post-launch content slated for early 2021.

If you’re looking to dive into the Early Access game right now, you can explore four expanded levels that provide 14-20 hours of playtime according to the press release, with nearly 40 weapons and over 100 skills to try out.

Lost Epic is described as a side-scrolling 2D Souls Action-RPG. Players can explore the world known as Sanctum with the quest to bring the Hall of Six to its knees. The game features fast-paced, action-packed battles with a range of ways to advance your character with upgradeable skills and weapons.

You can check out the latest trailer below:

For more information, find it here in the Diablo 2 Resurrected Open Beta confirmed for August and the Godfall Fire & Darkness expansion sets to make changes to Valorplate ailments.