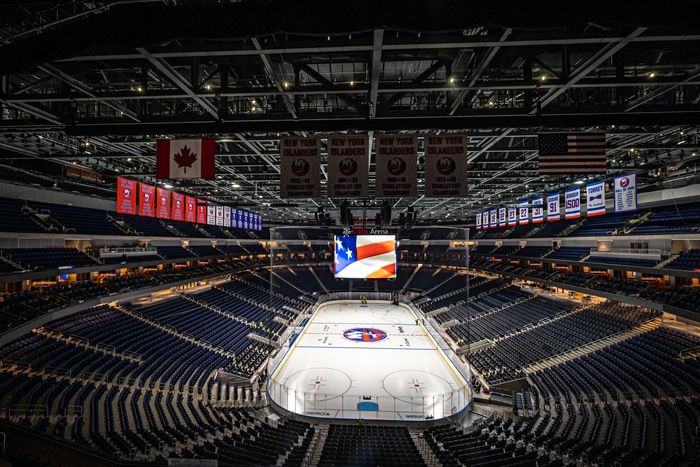 On Saturday night, the New York Islanders will play their first game at UBS Arena, a handsome new structure just over the city line in western Nassau County, next to the Belmont Park racetrack. The move marks the end of a long relocation process for the ice-hockey team, and it marks the end of a local sports-venue boom. Since 2007, the metropolitan area has seen the construction of two Major League Baseball parks, one National Football League stadium (shared by the region’s two teams), one Major League Soccer field, and three major indoor venues in Brooklyn, Newark, and Elmont — in addition to a $1 billion renovation of Madison Square Garden.

As a result, the area’s NFL, NBA, WNBA, NHL, and MLB teams play in newish (or dramatically upgraded) venues with all the amenities pro teams desire and demand: luxury suites, giant scoreboards, and an array of extra ways to wring money from fans. And the arrival of UBS Arena marks the end — at least for now — of a longtime New York sports dynamic: teams demanding a new publicly subsidized venue or else. Ever since the Dodgers were denied the opportunity to build the Buckminster Fuller–designed dome they wanted above Atlantic Yards and fled to Los Angeles, New York’s teams have used as leverage the threat (explicit or implied) of leaving town, sometimes just for the suburbs, sometimes for another city altogether.

The most famous and aggressive deployer of this method was the late Yankees owner George Steinbrenner, who started making noise in the early 1990s about following the Giants and the Jets to the New Jersey Meadowlands, citing crime in the Bronx and falling attendance. He then tried to engineer a move to the far West Side of Manhattan after local officials floated that site as a compromise. Steinbrenner ultimately did get a new ballpark in the Bronx. It was teased in the final days of the Giuliani administration and opened in 2009 thanks in part to hundreds of millions of dollars in tax-exempt bonds and subsidies from the city and state. (Devout Yankees fan Giuliani pushed for a tentative deal before Mike Bloomberg, who had expressed ambivalence about new ballparks for the Yankees and the Mets, was sworn in as mayor.)

Steinbrenner was surely the loudest practitioner of this strategy, but his was hardly the only team that considered (or “considered”) skipping town. The Devils were wooed by Nashville with a lucrative relocation offer during their 1995 Stanley Cup run; only a new lease with the New Jersey Sports and Exposition Authority later that year — which bumped up the team’s revenues — kept them in New Jersey. They moved into a new building in Newark in 2007.

Occasionally, teams seek goodies other than a new arena. The Knicks and the Rangers began flirting with a move to New Jersey just four years after the current Madison Square Garden opened, seeking tax relief from New York City. Nearly a decade later, ownership was still complaining about its taxes, and in 1982, the city agreed to an exemption that is (controversially) still in place today and likely to be renewed in two years.

But modern stadiums, capable of generating money in ways that couldn’t be imagined when Ebbets Field or even Shea Stadium opened, are the real prize. The Islanders’ journey began more than a decade ago with a proposal for a multibillion-dollar mixed-use project that included a renovated Nassau Coliseum, but voters rejected the plan in 2011. The team moved into Brooklyn’s Barclays Center in 2015 as something of a compromise, sharing it with the Nets, but that building wasn’t designed to accommodate hockey and was inconvenient for the Islanders’ Long Island fans. Attendance lagged, and the team again looked for a new home, eventually winning a bid in 2017 to build on state-owned property near Belmont Park (reportedly with, yes, some tax breaks) and temporarily moving back to the Nassau Coliseum while the new arena went up.

The owner during that period, Charles Wang, didn’t loudly threaten to move the team the way Steinbrenner did, but people in the know didn’t deny it was a real possibility. (Opposing fans took to chanting “Kansas City” to mock the team, referencing that city’s downtown arena, which still awaits a major tenant.)

There is only one sports venue likely to be built in New York in the near future: a stadium for the New York City Football Club, the MLS team that has been playing at Yankee Stadium since 2015. But NYCFC is in a unique position because the plan has always been for it to share the Yankees’ ballpark for a while and then move into its own venue, and all parties agree it should have one somewhere in or near the city. That process has been messier than expected, but leaving town isn’t on the table. If the Bronx site the team is currently targeting doesn’t pan out, it’s expected to turn its attention to one in Queens. Everyone else, it seems, has gotten what they wanted. And we, the taxpayers, have subsidized a whole lot of it, to the tune of more than $2.6 billion plus many millions more in ongoing tax breaks.