Trisha Paytas quits Frenemies podcast after fight with Ethan Klein, says “I’m not sorry for how I feel” 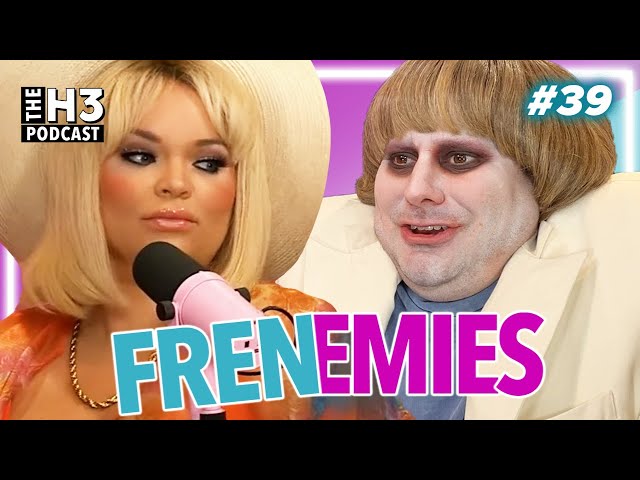 Trisha Paytas, co-host of the popular podcast Frenemies, officially left the show on June 8 due to arguments between her and Ethan Klein over her contribution.

The Frenemies podcast first aired on September 15, 2020. It is hosted by 33-year-old YouTube stars Trisha Paytas and 35-year-old Ethan Klein, the owner of H3H3 Productions.

The two started the podcast after inviting Trisha on the H3 podcast for their version of “The Bachelorette”. Each episode generated over a million views and became a fan favorite on YouTube.

Trisha Paytas sparked a big backlash after starting an argument with Ethan Klein in the middle of Episode 39 of the Frenemies podcast.

What was supposed to be an episode meant to discuss the drama surrounding Gabbie Hanna, took a bad turn towards the end of the series.

The argument started when Trisha Paytas brought up the movie “Brokeback Mountain”, referring to the jokes of Logan Paul continually hugging Floyd Mayweather during their boxing match. While discussing trans and gay rights, Ethan apparently ignored her, which angered Trisha.

Afterwards, fans noticed that the 33-year-old went off as Ethan almost completely dismissed her comments in an attempt to move on to another segment.

“Let’s go to your stupid [segment]- I don’t like this segment just for the record. Fan advice is such a dumb thing.

Tensions in the room escalated as the feud between the two worsened. In short, Trisha began to claim that she was not heard in terms of ideas contributions, while shaming Ethan for deducting a five percent “production fee”, which covered the cost of the crew and the shoot.

“I never choose the costumes, I never do vlogging, and I give out so many ideas like dancing for vlogging. I give so many ideas and you don’t listen.

This then prompted Ethan to ask:

“Why are you attacking me? “

Trisha then coached the production team with her argument against Ethan.

“It’s frustrating for you to say, ‘Oh, we’re doing all of these good things,’ but it’s not a good thing. I appreciate the work you do, but it’s not that great.

Things got even worse when Trisha Paytas quickly began discussing the show’s production costs, asking Ethan why she had never been told who they hired because he allegedly took five percent.

Ethan explained himself by saying:

“It’s for production costs. I take five percent more of the podcast income, and I take the climax income and everything else that we share.

“It’s not even about that, we produce the show and take a cut, I feel like it’s beyond reasonable. Even though we are working and doing all the work, I don’t know why you are beating me for money.

The two continued to tell each other that Trisha was upset until the latter resigned and asked Ethan to end the series early so she could leave.

In response to her unprecedented behavior on the podcast, fans reacted to comments favoring Ethan Klein, claiming Trisha was a “kid.”

After the episode of Frenemies, Trisha Paytas posted a video on her YouTube channel titled “Resigning from Enemies,” where she explained the reasons why she didn’t want to work on the series.

Although she is “almost family” with Ethan, as she put it, she has claimed that it is in her best mental health interest not to continue filming every week.

Trisha then posted a message in the comments section of the video, officially declaring her resignation from the show.

Ethan Klein responded to his resignation via Twitter, posting a series of tweets expressing his feeling and frustration with the situation.

He began by pointing out the merch Frenemies that he and Trisha Paytas had started, not knowing what to do with the unreleased material.

Afterward, Ethan explained how he was “surprised” by Trisha’s explosion. Claiming that he did all he could “humanely” to make the podcast work.

I’m honestly disgusted with it all, Trisha’s video this morning was a total surprise to me. I don’t really know what else I can say or do. I’m so sorry to all the frenemies fans, I know how much this meant to everyone, I did all I humanly could to save it

Ethan finally addressed the joke the two had made before, alluding to the fact that they always argued when in costume and ordering Domino’s pizza.

In the end, was it my fault I ordered pizza while dressed as Uncle Fester?

Fans of the show are heartbroken by the news. During this time, Trisha lost a large number of followers due to her explosion which ended “everyone’s favorite podcast”.