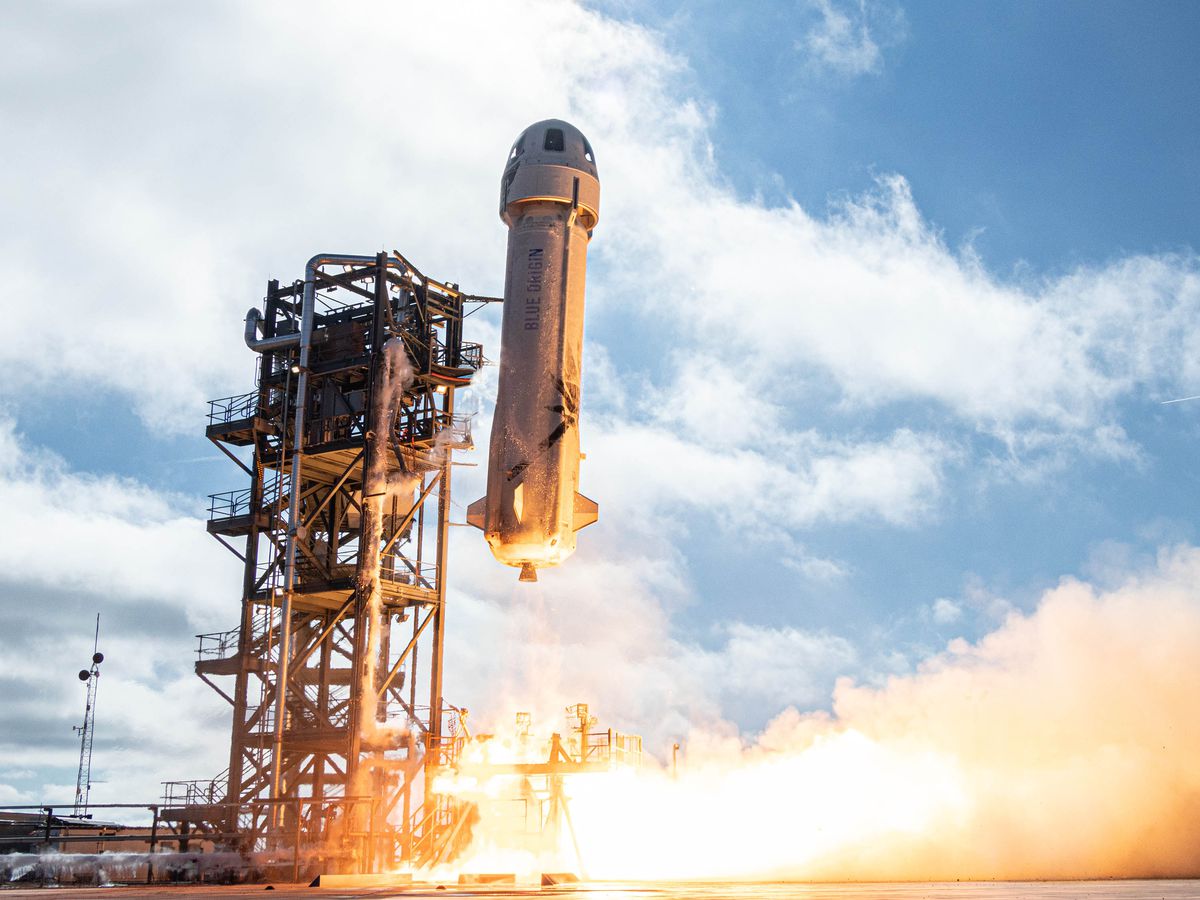 Amazon founder Jeff Bezos flew straight to the frontier of space. The billionaire – carried in a rocket built by his spaceflight company Blue Origin and accompanied by three other space tourists – joins a small but growing number of people who have traveled to space but are not professionally trained astronauts.

Bezos’ journey is a big deal for Blue Origin – although its New Shepard rocket, named after the first American to visit space, Alan Shepard, has already completed 15 successful test flights. Tuesday is the first time the rocket has transported humans to space. But more importantly, the trip signals that the era of civilian space tourism has officially arrived – or at least, it’s for the very rich.

On July 11, Richard Branson, fellow billionaire and founder of space travel company Virgin Galactic, beat Bezos to the space frontier when he traveled there for a 90-minute trip with five other passengers in the one of his company’s planes.

Bezos and Branson’s space journeys are a reminder that space is no longer just a place where national governments set out to explore and learn more about the universe, but a terrain on which private companies capitalize. Bezos has invested billions of his own money in Blue Origin, and his company recently auctioned a ticket to space on one of its rockets for $ 28 million.

In a pre-launch mission briefing on Sunday, Blue Origin’s director of astronaut sales Ariane Cornell said two more flights were scheduled for this year and the company had “already built a strong pipeline of interested customers “. Analysts at investment bank Canaccord Genuity have estimated that tourism in the suborbital space could represent an $ 8 billion industry by the end of the decade.

Blue Origin hosted a live stream on its website.

At approximately 9:15 a.m.ET on July 20, Blue Origin’s rocket lifted off from a remote desert in West Texas. On take-off, the vehicle flew into space, carrying a six-seat capsule containing Bezos and the other passengers, pushed upwards by a powerful 18-meter-high booster rocket.

To reach space, New Shepard moves incredibly fast: faster than Mach 3, or more than three times the speed of sound. Within minutes of the start of the flight, the capsule separated from the booster, which then returned to Earth and landed vertically (ensuring it is reusable for future flights).

Meanwhile, Blue Origin’s capsule moved to the top of its flight path and crossed the Kármán Line, the internationally recognized border between Earth’s atmosphere and space. It’s about 62 miles above the Earth’s surface, about 10 miles higher than Richard Branson’s Virgin Galactic flight earlier this month. Like this flight, those who traveled aboard Blue Origin’s New Shepard got a breathtaking view of Earth and had the chance to experience weightlessness.

“They are obviously going a little higher, a little faster, but they will still have only a few minutes of experience in low microgravity before coming back down”, Wendy Whitman Cobb, professor at the US Air School of Flight Studies and Space Force, Recode told Recode. “There is also the notion of what is called the“ overall effect ”. This is when astronauts go up into space and are high enough to see Earth as it is, and it kind of changes the way they see things on Earth.

After reaching the top of the flight, the capsule returned to Earth’s atmosphere, eventually deploying parachutes to land. Overall the whole trip was only 10 to 15 minutes.

Jeff Bezos, who founded Blue Origin in 2000, is making his lifelong dream of space travel come true. “If you see Earth from space, that changes you. It changes your relationship with this planet, with humanity, “the billionaire explained in a video announcing the theft in June.” It’s a big deal for me. ”

Bezos was joined by his brother, firefighter and charity executive, Mark Bezos. The flight also carried the oldest and youngest people to ever visit space: Wally Funk, an 82-year-old American aviator, and Oliver Daemen, an 18-year-old Dutch teenager. Funk, the Federal Aviation Administration’s first female flight inspector, was one of the first women to train to become a NASA astronaut, but was ultimately denied the opportunity to travel to space due to of his sex. Daemen joins the flight as Blue Origin’s first paying customer; it replaces a still anonymous bidder who paid $ 28 million for a seat (this person would have had a scheduling conflict and will travel on a subsequent flight).

While Blue Origin has gone down in history in a number of ways, the flight is also a reminder that many people see space tourism, at least for the foreseeable future, as primarily funded by and for the very rich – and that it won’t. not much to advance science and our understanding of space.

“The experience of a few hyper-rich amateurs paying $ 28 million to throw up for 15 minutes likely won’t bring many average people closer to spaceflight or change their impression,” said Matthew Hersch, a technology historian at Harvard. , an email. “Compared to NASA space vehicles, these are smart amusement park rides with minimal utility, intended to support a tourism business that was never on the NASA charter.”

In fact, Bezos and Blue Origin aren’t the only private companies looking to cash in on space walks. Virgin Galactic, fresh off the Branson flight, is already moving forward with plans to test and modify its planes for possible commercial service. And this fall, SpaceX, founded by Elon Musk, is also sending its rocket into space, with billionaire Jared Isaacman on board. At the same time, NASA is also taking these companies into more ambitious endeavors, including hiring SpaceX to transport its astronauts to the International Space Station.

“Show customers [and] showing the world that they have enough confidence in their system to get on board and experience it for themselves… is a big part of that, ”Whitman Cobb, of the Air Force School, told Recode. “Part of it is the ego, too.”