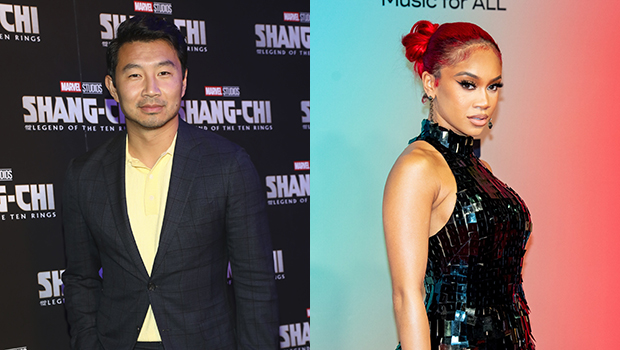 Marvel actor Simu Lou is taking the reigns on ‘SNL’ this week alongside first-time performer Saweetie.

Live from New York, it’s Saturday night! Season 47 of Saturday Night Live is well underway, and show runner Lorne Michaels has yet to disappoint with his choice of show hosts and musical guests. This week, Simu Liu, 32, is hosting with returning musical guest, Saweetie, 28. Just a week ago, another
(soon-to-be) Marvel star hosted: Jonathan Majors is set to make his MCU debut in Ant-Man and The Wasp: Quantumania.

Simu Liu hosts with music from Saweetie THIS SATURDAY pic.twitter.com/DNQoyBojQJ

Owen Wilson, 52, opened the season musical guest Kacey Musgraves, 33, on Oct. 2. The Wedding Crashers star also made his hosting debut in season 47, chalking up the long wait to nerves. “I get really nervous with public speaking. I’ve never done any of those commencement addresses or Saturday Night Live just because I get too nervous,” he explained on a hike to friend Kevin Nealon in a YouTube video. Owen slayed it, and even had some help from his brothers Andrew, 57, and Luke, 50, during his opening monologue.

Learn more about this week’s show below.

Hot off the success of his debut MCU film Shang-Chi and the Legend of the Ten Rings, Simu Liu is making his SNL debut! The 32-year-old actor made history as the first-ever Asian superhero protagonist in the Marvel film universe following five years on the popular Canadian sitcom Kim’s Convenience. The CBC show was shot and set in Liu’s hometown of Toronto, Ontario.

“LIVE FROM NEW YORK IT’S SATURDAY NIGHT,” Simu wrote on Twitter shortly after NBC announced him as the Nov. 20 host. The excited actor also shared a behind-the-scenes image of himself on-stage at Studio 8H, making a joke about the previous week’s musical guest Taylor Swift, 31.

Shortly after this photo was taken, Simu was promptly tackled by security and ejected from the premises. He is currently in his hotel room eating nachos and rediscovering Taylor Swift. #WrongSaturday pic.twitter.com/aANZjNdgZr

“Shortly after this photo was taken, Simu was promptly tackled by security and ejected from the premises. He is currently in his hotel room eating nachos and rediscovering Taylor Swift. #WrongSaturday,” he hilariously penned.

Saweetie, 28, is hitting a major career milestone! The rapper is making her SNL debut on Nov. 20, fresh off the release of her single “Icy Chain.”

Saweetie, née Diamonté Quiava Valentin Harper, initially gained public recognition after her viral freestyle “Icy Girl.” On the track, she raps about her bougie lifestyle (including Tory Burch flip flops) over the beat from Khia‘s iconic “My Neck, My Back.” Back-to-back singles “My Type,” sampling Petey Pablo‘s “Freak-a-Leek” and, “Tap In,” sampling Too Short’s “Blow The Whistle,” earned her spots on the Billboard Hot 100. “Best Friend” featuring Doja Cat also earned the rapper her first MTV VMA award.

“Y’all better not miss my Icy Chain performance on SNL this Saturday!” Saweetie teased on Instagram earlier in the week, including a brief snippet of her rehearsal.

Saturday Night Live airs at 11:35 p.m. PST/EST and 9:30 p.m. MT on local NBC affiliates. The series can also be streamed live on the Peacock app.

Saturday Night Live has a number of new cast members joining the show this season, including Andrew Dismukes, Sarah Sherman, James Austin Johnson, Punkie Johnson and Aristotle Athari.
Michael Che and Colin Jost remain in their roles as “Weekend Update” hosts, which they took over in 2014 from Seth Meyers and Cecily Strong. Other returning cast members include Pete Davidson, Aidy Bryant, Kate McKinnon, Kenan Thompson, Chloe Fineman, Heidi Gardner, Alex Moffatt, Kyle Mooney, Chris Redd, Ego Nwodim, Melissa Villaseñor, Bowen Yang and Cecily.
Beck Bennett and Lauren Holt announced their departures ahead of season 47. Beck, 36, took to social media with a heartfelt message about his exit. “Love you, SNL,” he wrote on Sept. 27. “Gonna miss you so much. Thank you for 8 years of remarkable people and incredible experiences that completely changed my life. I had so much fun,” he also penned, alongside a slew of photo highlights which you can see here.

Lauren also shared a sweet tribute to mark the end of her one year run. “What an incredible year spent with incredible people. I will always be so grateful,” the comedian began. “Cheers to all the cast members past, present, & future…so proud to be/have been a part of this amazing family. These three letters will always bring joy to my heart… SNL, I love you,” she also said.